This article was published by Else DeFranco in Mongabay.
https://news.mongabay.com/2021/11/carnivores-avoid-rush-hour-by-taking-to-roads-at-night/

Bears, wolves, and other carnivores in Michigan adjust their behavior to avoid active roadways, researchers reported recently in the journal Global Ecology and Conservation. The study is part of the growing field of road ecology, which explores how wildlife responds to human thoroughfares—and what this means for coexisting with carnivores in an increasingly crowded world.

Some carnivores can thrive in areas with frequent human disturbances and traffic. However, “what kind of carnivore that is within the ecosystem might be different than what you would get in an undisturbed environment,” said lead author Todd Kautz, now a postdoctoral researcher at the State University of New York College of Environmental Science and Forestry (SUNY-ESF) in Syracuse.To track the summertime movements of iconic carnivores, the researchers captured and placed GPS collars on 64 black bears (Ursus americanus), 13 bobcats (Lynx rufus), 39 coyotes (Canis latrans), and 39 gray wolves (Canis lupus). The collars recorded precise locations every 15 minutes as animals navigated the landscape. The team also monitored human activities with 300 motion-sensing cameras along roads in Michigan’s Upper Peninsula—a landscape of small towns and sweeping forest wilderness with no major highways.All four species used roads more frequently at night, the data showed. Animals also traveled more quickly when they were on or near roads. Although all of the carnivores mostly avoided roads and hurtling vehicles by day, black bears and bobcats were far more road-shy. Wolves and bears living near dense road networks were more nocturnal than their counterparts who traversed remote areas. The smaller carnivores didn’t become more nocturnal overall, but simply shifted their daylight activities away from roads.

“I think that’s a testament to how historically bobcats and coyotes have done much better with human expansion, compared to black bears and wolves,” Kautz told Mongabay. “They just seem to be more adaptable to human disturbance.”

In a mild surprise, the animals also avoided a corridor roughly 500 meters wide on either side of the roads. “This suggests the functional footprint of roads is quite extensive. It’s much greater than the physical footprint of the road itself,” said study co-author Jerrold Belant, an ecologist at SUNY-ESF.

These corridors could attract prey species like deer as they seek refuge from hungry carnivores. This not only changes predator-prey relationships, but also may influence how often vehicles collide with deer.

The Michigan carnivores are all part of healthy populations, with wolves returning to the area in the mid-1990s after a 25-year absence. Their ability to persist may rely on how effectively they avoid risky run-ins with hostile people and speeding vehicles. Hitting the roads at night allows them to safely travel across vast hunting ranges.

The authors note that many roads within the study area were unpaved, and they did not account for the numbers of vehicles. Other research has demonstrated that roads with heavier traffic, such as wide highways, pose much greater barriers to safe passage by wildlife.

“Unpaved roads with low traffic volumes can actually have benefits to wildlife by facilitating movement,” said Kaitlyn Gaynor, a postdoctoral researcher at the U.S. National Center for Ecological Analysis and Synthesis in Santa Barbara, California. Gaynor, who was not involved in the study, identified similar road use by elephants in Mozambique’s Gorongosa National Park.

Studies revealing how animals find creative ways to thrive in a crowded world are encouraging for conservation efforts. Still, “we have to do our part to adapt to the presence of wildlife, too,” said Gaynor. “Human-wildlife coexistence is a two-way street, and we can’t expect the wildlife to do all of the adapting.”

Elyse DeFranco (@elyse_defranco) is a graduate student in the Science Communication Program at the University of California, Santa Cruz. Other Mongabay stories produced by UCSC students can be found here.

This article was published in Wildlife Professional November/December 2021 issue.
https://wildlife.org/the-november-december-issue-of-the-wildlife-professional-2/

Dr. Hamilton is Chief Scientist at NatureServe and will deliver a talk entitled, “Precision conservation at the scale of a nation.”  In this inspiring presentation, Dr. Hamilton will explain groundbreaking efforts to integrate modern computing together with decades of biodiversity data and a national network of species experts to produce an unprecedented map for preventing extinctions.

Dr. Hamilton is a biodiversity scientist with graduate degrees from Yale and the University of California, Berkeley, and extensive field experience in the tropical forests of Latin America. At NatureServe, Dr. Hamilton leads a staff with expertise in ecology, zoology, botany, conservation, data science, and information management. 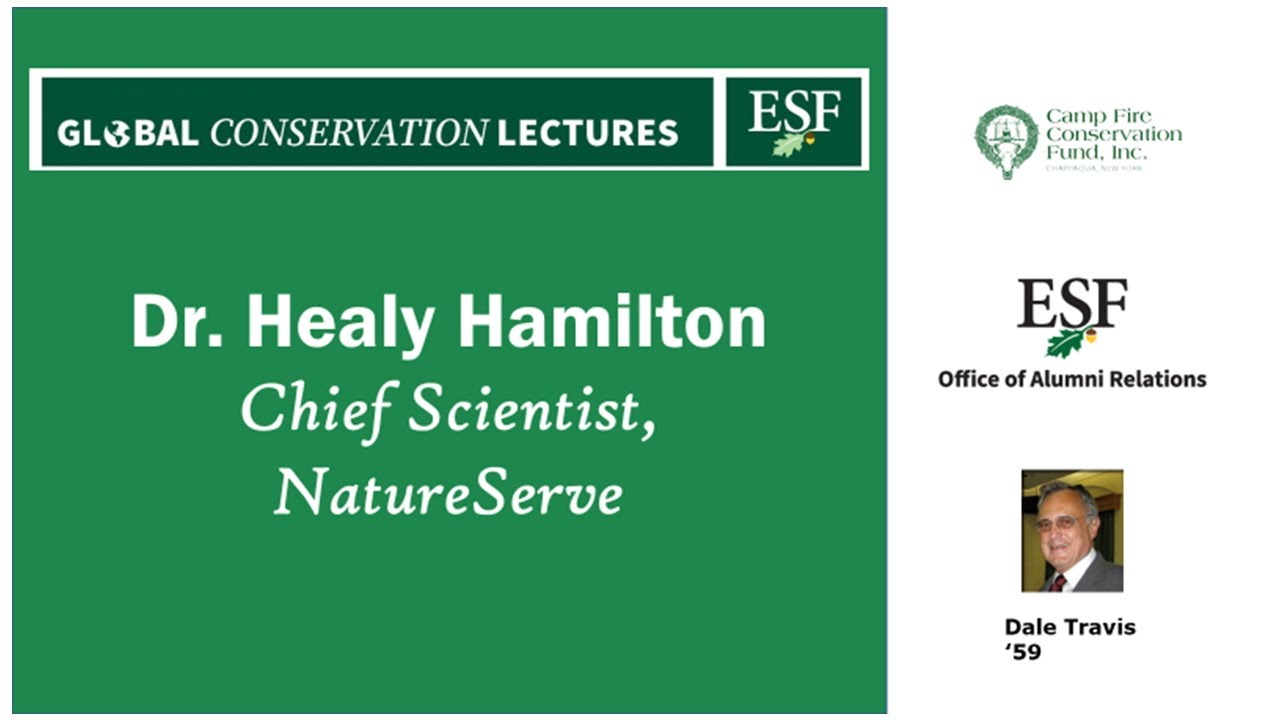 This article was published by SUNY ESF Alumni Association.
https://alumlc.org/esf/11336

Precision Conservation at the Scale of a Nation

In our rapidly changing world, both the science and practice of conservation require precise knowledge of where imperiled species occur. In this inspiring presentation, Dr. Hamilton will explain groundbreaking efforts to integrate modern computing together with decades of biodiversity data and a national network of species experts to produce an unprecedented map for preventing extinctions.

Admission to the lectures and receptions are free. Parking will be available on campus.
Reception to follow.

This article was published by SUNY ESF.
https://www.esf.edu/gcl/?fbclid=IwAR2JbF2bk-l3-pQtd5uvyixO4eDWFSOPqiVQIroIbZyyGpGKPLhV62nzT8c

This article was published by National Park Service.
https://www.nps.gov/isro/learn/news/gps-collars-inform-isle-royale-wolf-restoration-and-monitoring-efforts.htm

Initial results are in from collaborative efforts to restore the wolf population and predator-prey dynamics on Isle Royale National Park. Over a two-week period in late April and early May, personnel from the National Park Service (NPS), State University of New York College of Environmental Science and Forestry (SUNY ESF), Grand Portage Band of Lake Superior Chippewa, U.S. Department of Agriculture, Wildlife Services, and Michigan Technological University captured five wolves on Isle Royale to attach GPS radio collars for evaluating spatial distribution and habitat use, predation and social structure of this fledgling population. The captures included a translocated male wolf originally caught on Michipicoten Island, Ontario (W012M) and three males and a female, all presumed to be born on Isle Royale in 2020. The capture of the four unmarked wolves further demonstrates reproduction and survival, important metrics for this restoration effort.

“As batteries wear out on the GPS collars on wolves originally translocated to Isle Royale, we lose their signal. The capture of wolves this spring was critical for us to continue our long-term monitoring of this population, in part by placing new collars,” said Jerrold Belant, SUNY ESF professor and researcher on the project.  “Characterizing the activities of individual wolves in relation to pack formation, reproduction, and survival will greatly improve our ability to measure the success of this effort.”

When captured on Michipicoten Island in March of 2019, wolf W012M was estimated to be two to four years old. This wolf was in good condition in early May of this year and is now estimated to be 4 to 6 years of age. Caught in the same area where three of the unmarked wolves, two males and a female were captured; wolf W012M is presumed to be the breeding male of this pack pending confirmation from genetic analyses. The other wolf, a young male, was captured in a different area of the park.

Park biologists and research partners from SUNY ESF will use GPS data from these wolves to identify “clusters” of locations where wolves have spent extended periods of time. These data will be used to distinguish predation, rendezvous, rest, and den site locations. This location information will allow researchers to quantify reproduction and recruitment of the population.

Identifying a den site provides researchers with an opportunity to visit the location after wolves have moved on. At the site, researchers collect scat that will provide genetic evidence on the potential number of pups born there, as well as the ability to determine parentage and packmates.  Continued scat collection at rendezvous sites, and repeated systematic searches for scat on the park’s trails, allows researchers to follow individual wolves through time and further estimate survival and reproduction.

“Like scientists all over the world, our restoration team adjusted to the impacts of the COVID-19 global pandemic,” said Mark Romanski, NPS biologist and project coordinator. “Winter capture operations were cancelled twice, and the annual winter population count in 2021 was cancelled, so the NPS adapted. Once again, our partners stepped forward to help ensure that the effort to live capture and collar wolves this past spring was a success and carried out safely. The ability to document reproduction and recruitment is essential for evaluating the restoration program’s success, and GPS collars are one of the most important tools in our toolbox.”

The NPS and its collaborators will continue to monitor this population of wolves and document ecosystem changes as they settle into the island environment. For further information on the population and on-going research and monitoring concerning this ecological restoration project please visit the NPS website page about wolves.

This article was published by Else DeFranco in Mongabay. https://news.mongabay.com/2021/11/carnivores-avoid-rush-hour-by-taking-to-roads-at-night/ Large carnivores avoid people by steering clear of roads during the day, … END_OF_DOCUMENT_TOKEN_TO_BE_REPLACED